In 2004, Willing Hands started on its journey to recover fresh food in order to improve health and provide nutritious fruits, vegetables, and baked goods to our neighbors in need. It has been a successful journey due in large part to the Upper Valley community which has supplied us with wholesome food, generous donors, and energetic volunteers. We are indebted to the businesses, farms, and people who have supported Willing Hands.

From the beginning, the face of Willing Hands has been our van or truck. First one van, then the next, and now our second box truck have been on the road seven days a week year after year, stopping only for major holidays. Many people ask how many vehicles we have. The answer is now two but but since they run continuously it may seem like more.

Our vehicles are an integral part of Willing Hands’ operation. The progression from mini-van to large van to our first and second box trucks parallels the evolution of Willing Hands. In short, our vans and trucks frame our history.

In 2004, Peter Phippen resigned from his job at the Hanover Co-op Food Store and founded Willing Hands. Peter’s idea was to redirect healthful, good quality food from the waste stream to organizations serving Upper Valley people in need. He had a plan for giving to the community and the community supported his plan.

The Co-op Food Stores agreed to give Peter produce that would otherwise go to waste and paid Willing Hands to take it away. The Co-op still does this today. [Editor’s note: The Co-op actually no longer pays Willing Hands for redistributing food; however, since 2016 Willing Hands has been one of three Food Access Partners of the Co-op Food Stores (other partners are LISTEN Community Services and the Upper Valley Haven), which receive monthly contributions raised by shoppers who “round up” their purchases at the various store locations – click here for a short Willing Hands video about the Pennies for Change program.]  The Upper Valley Haven agreed to be Willing Hands’ fiscal agent until we became a non-profit. Peter, in turn, started delivering much-needed fresh produce to The Haven. We still deliver to The Haven (6 days a week) and gave them 64 tons of wholesome food in 2017.

The early years were somewhat chaotic. Our first vehicle was an aging donated mini-van that presented numerous challenges from carrying capacity to reliability. We had no place to garage the van so extremes of heat and cold were always issues for produce stored in it. Peter drove the van daily and worked in his spare time to raise awareness of Willing Hands.

He also recruited Willing Hands’ first board. Jack Lyons was our first president and was soon joined on the board by his wife, Terry. With no Executive Director and no money to hire one, board members managed the day-to-day operation, worrying about the details of pick-up and delivery routes, where produce would come from and to whom it should be given. Funds would sometimes go to zero and board members lent money to keep Willing Hands afloat.

By the time Willing Hands celebrated its first anniversary in 2005, however, we had delivered over 100 tons of food to over 30 social service organizations.

That year, the IRS granted us non-profit status, opening a lot of opportunities for Willing Hands.

While we don’t have a picture of that early mini-van, we do have an image that conveys the sense of where we started. This image at right, taken from a Maxfield Parrish print, served as Willing Hands’ first logo.

2007 was a pivotal year for Willing Hands. When Heather Bagley applied for a driver’s job, board member Mark Lansburgh quickly saw that Heather was well qualified for a different role, that of part-time executive director. The board hired Heather, who took over responsibility for day-to-day operations.

That year, Willing Hands entered a period of astonishing growth in the amount of food it received and delivered. With Heather managing the daily work of Willing Hands and our part-time drivers, the board could change its focus to strategies for handling the burgeoning food supply.

The first order of business was to get a van that was both larger and reliable. A very generous local benefactor gave us the money to buy a Sprinter van. We outfitted it with shelving to ease the drivers’ access to boxes of food, refrigeration to protect produce, and signage with our new logo.

People took notice. Awareness of Willing Hands grew. Jack asked Jay Van Arman if we could garage the van at his farm in Norwich. With the addition of heat and insulation, the new garage became the perfect place for not only the van but also extra produce. We were being given more food than would fit in the van.

In 2007, we received our first grant from the United Way. This grant signaled that Willing Hands was not only worthy but also mature enough to be a sound investment in the Upper Valley community.

As food donations from the Co-op Food Stores continued to increase, Willing Hands also expanded its relationships with local farms and bakeries. In 2007, with the help of Cedar Circle Farm, we started an organic garden and staffed it twice weekly with volunteers who grew, weeded, and harvested tons of produce. The garden has increased in size to one acre and in 2016 we grew 8 tons of food.

At the same time, we began gleaning farmers’ fields. Volunteers dug potatoes, pulled carrots, beets, and onions, picked corn and lettuce, and in the fall harvested apples. The gleanings were bountiful and we are very grateful to Edgewater Farm, Crossroad Farm and many other local farms and to our energetic volunteers. Soon we were outstripping the capacity of our Sprinter. By 2008, we had gleaned almost 6 tons of food at Edgewater Farm alone. In 2016, that number increased to 30 tons from a growing number of local farms and orchards.

We also increased our outreach to food recipients in 2007. Our drivers noticed that food recipients eagerly took some vegetables but were much more reluctant with others, for example, eggplant and artichokes. We started distributing recipes and giving cooking classes to teach recipients how to use the vegetables we give them. This program continues today to promote healthy eating and good use of the food we provide.

By 2012, Willing Hands had become a mature and stable organization.   We developed the processes and policies to support our work and enjoyed a little breathing space as changes starting happening at a more manageable pace.   We worked hard to find new sources of food, to grow more produce in our garden, and to increase our gleaning. With continued success, in 2012, we distributed 188 tons of healthy food. Once again, we were pushing the limits of our van and our storage area.

It was time once again to buy a new vehicle. In 2012, Willing Hands purchased a new box truck. With the truck’s greater weight and load capacity, we were able to make our routes more efficient and to better serve our food recipients. Improved refrigeration and heat also made the van a better storage space.

In 2015, Heather retired as Executive Director and we hired Gabe Zoerheide. Gabe and the Board are looking at what we want the future to hold for Willing Hands. The first order of that work, of course, has been to buy a larger and heavier-duty truck for our ever-increasing food supply. It arrived in the spring of 2017 and, as expected, does not fit in our garage. With the addition of eggs and milk to our deliveries, we also need more climate-controlled space for storage than our garage provides.

The Staff and Board of Willing Hands are looking forward to these challenges and others that are in store for Willing Hands as we guide the organization in its fight against hunger in the Upper Valley.

After a two year search, Willing Hands has found a new home at 198 Church Street in Norwich VT. 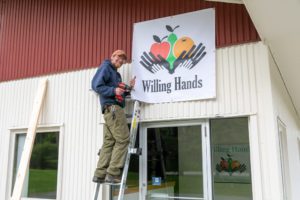 With its 10-acres and 4,160 square foot building, Willing Hands will be able to double down on our mission to provide fresh, nutritious food to our neighbors in need throughout the Upper Valley. The warehouse space at 198 Church will allow us to expand our food storage capabilities. We will be able to house more healthy food for longer periods of time, so that the quantity, quality, and consistency of our fresh food deliveries to Upper Valley will continue to improve. The outdoor, office, and conference space at this property will allow us to expand our staff and volunteer programs. We are excited about all the ways in which we can make a deeper impact on our mission to reduce food waste, alleviate hunger, and improve health in the Upper Valley.

We have deep appreciation for David and Kathy Clem who structured a bargain sale to facilitate the success of Willing Hands in providing this important service to the Upper Valley. Previously, the Clems assisted Grassroots Soccer in this space. We are grateful to the Jack and Dorothy Byrne Foundation and the White Mountains Insurance Group for their generous and timely support that allowed us to quickly complete the transaction and to install refrigerated coolers so that we can move in later this spring.

Thank you to Jay and Debbie Van Arman, and their family, for sharing their home and farm with Willing Hands for these past 10 years.

Over the coming months and years, Willing Hands will be raising money to establish 198 Church Street as an environmentally and financially sustainable community resource. Stay tuned for the many ways that you can support Willing Hands as we increase our volunteer opportunities and complete our capital campaign to fulfill the vision for our new home!

Fighting hunger and food waste, one box of cucumbers at a time. Thanks to all of our hard-working partners like South Royalton Area Food Shelf who make this nutritious food available to our community! ... See MoreSee Less

Tonight at 8:00pm, Vermont PBS will feature a short film about Willing Hands created by the amazing Ezra McGinley-Smith. Ezra is instrumental to our organization, and we're so proud that his hard work is going to be featured tonight. Check it out! ... See MoreSee Less